Pollutants are of two types:

The entire credit for air pollution goes to existence of beings on this planet. Only a handful of natural processes adds to it. Humans think more of themselves and less of everything else, behaving as demi-gods destroying everything in the way to meet their own ends.

It is one of the most alarming environmental hazards that should be taken care of immediately otherwise this future is not very far: 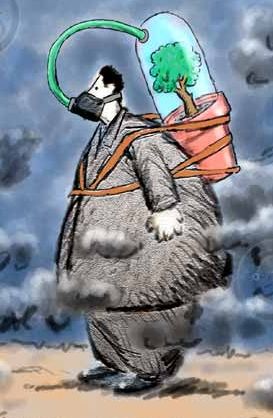 Man carrying plant based oxygen chamber on his shoulders 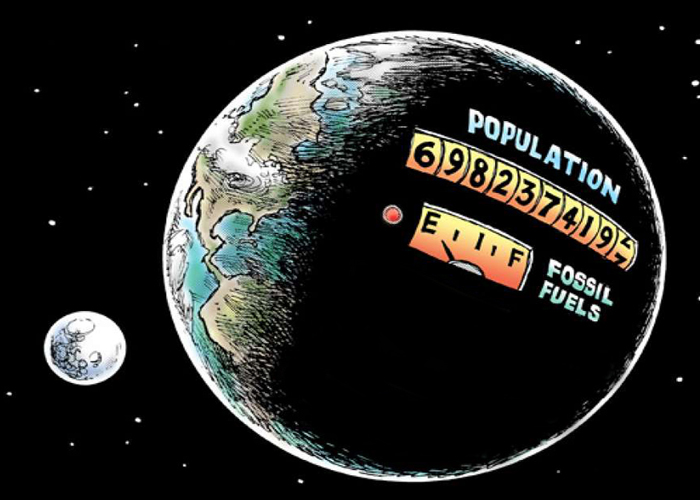 Burning of fossil fuels like coal, petroleum, etc. is one of the major cause of air pollution. Burning of these fossil fuels results in incomplete combustion as a result a lot of smoke and dust particles are left in the reaction.

In coal based factories where coal is the major source of energy production, on burning coal emits a series of gases as well as particulate matter with metals (heavy metals such as Arsenic, lead, mercury) and organic compounds (such as PAH’s).

The exhaust from industries emit gases like carbon dioxide, carbon monoxide, Sulphur-dioxide and other poisonous gases.

These gases are increasing on a rapid rate in atmosphere making it difficult to breathe and paving its way to respiratory disorders like bronchitis, asthma, etc. The heavy metals released from industrial exhaust are carcinogenic as well. 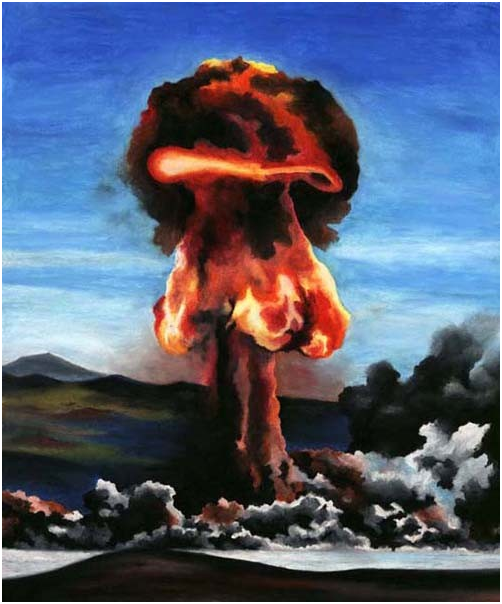 Unconscious leaks are caused by ignorance, mishandling and lack of proper arrangements.

There have been almost 1oo accidental nuclear leaks in the world, countable gas leaks and chemical leaks. The direct emission of these substances de-generate the air quality. 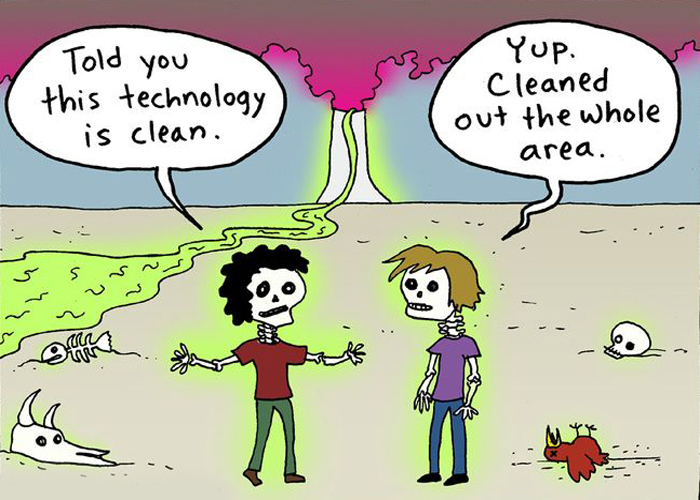 Accidental nuclear leak is one the most hazardous catastrophe causing huge loss of life, property and air, obviously. The effects of such leaks on the environment and lives of people are almost irreparable. 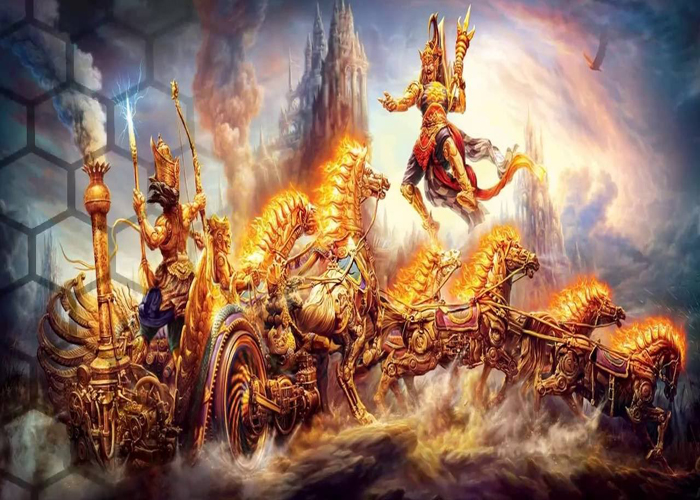 In global power struggle the world forgot all values and morals, in order, to be the best nation.

To prove oneself as the most powerful nation, countries fought with one another. The two world wars are classic exemplum of destruction, havoc, wreckage and what not.

The air in or near the bombarding sights have been contaminated for eternity.

The use of nuclear and atomic weapons on other countries nonetheless, resulted in global degradation of air quality. Some of the world war sights are still radioactive and prohibited for any other further use or even human entrance.

The two world wars are the globally known wars but, millions of wars have already been fought and left its impact on air at different localities.

Further, wars will only deteriorate the air properties and make it more difficult to go back and restore the lost quality. 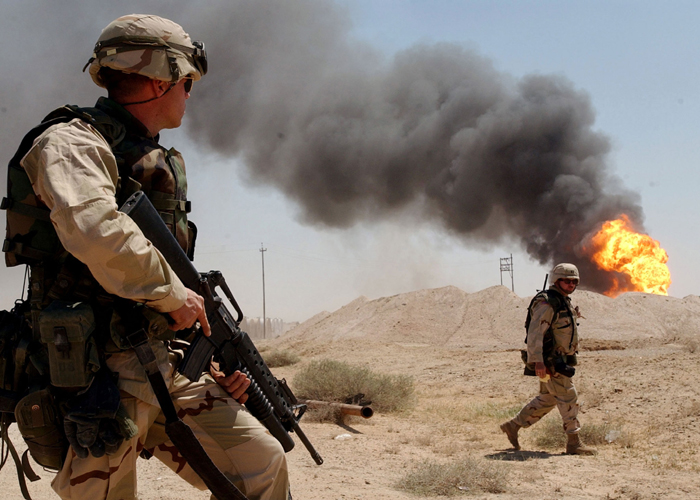 Martin Luther King once said, “A nation that continues year after year to spend more money on military defense than on programs of social uplift is approaching spiritual death.”

The introduction of toxic gases during practice and training sessions on military ground is one of the most overlooked cause of air pollution.

Military activities such as germ warfare and rocketry add to the situation. 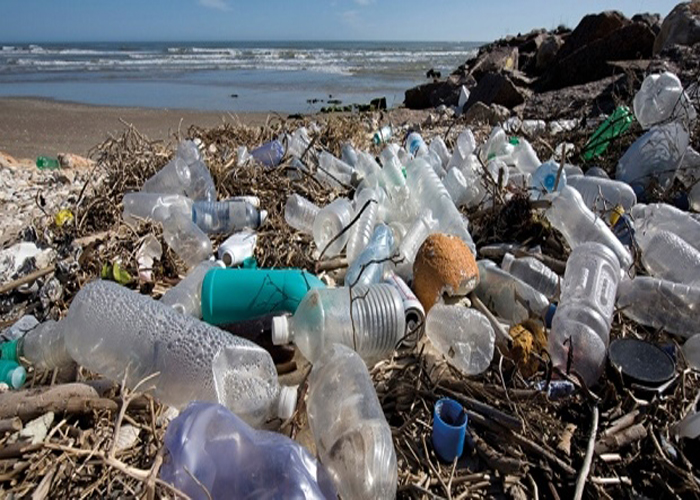 A landfill full of waste deposition

The deposition of waste in landfills generates methane gas. Methane is a highly flammable gas that may form explosives on exposure to surrounding atmosphere. Methane is asphyxiant (or suffocative) and may disclose oxygen in an enclosed space.  This leads to severe breathing problems including dis-functioning of lungs, improper cardiovascular activity, etc.

CFC’s or Chlorofluorocarbons emitted from air-conditioners and refrigerators is harmful for the ozone layer.

Ozone layer is the region of earth’s stratosphere that absorbs most of the Sun’s ultraviolet(uv) radiation.

When CFC’s are mixed in air, the molecules of CFC’s rise up in the air and destroy the molecules of ozone. Even small amount of CFC’s can create holes in ozone, exposing earth to harmful uv radiations of the sun. 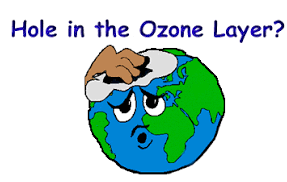 Chlorofluorocarbons (CFCs) in aerosols are a major cause of ozone layer destruction, and their production was banned in the United States in 1995. Despite such bans worldwide, the U.S. National Library of Medicine says CFCs can last for a century in the atmosphere, where they continue to do damage. 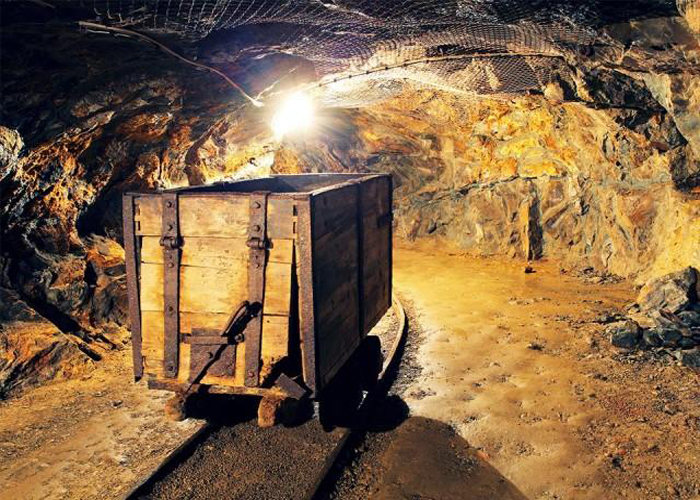 Insides of a coal mine

Mining again is one of the major cause of air pollution.

Mining operations like drilling, blasting, etc. are the major sources of emissions and air pollution.

Heavy and large amounts of explosives used for mining to bombard sights leads to emission of carbon monoxide and other harmful gases. Huge amount of dust is released along with these gases.

The left-over coal and coal particles can catch fire, and mine fires are difficult to control, with some burning for decades or even centuries. 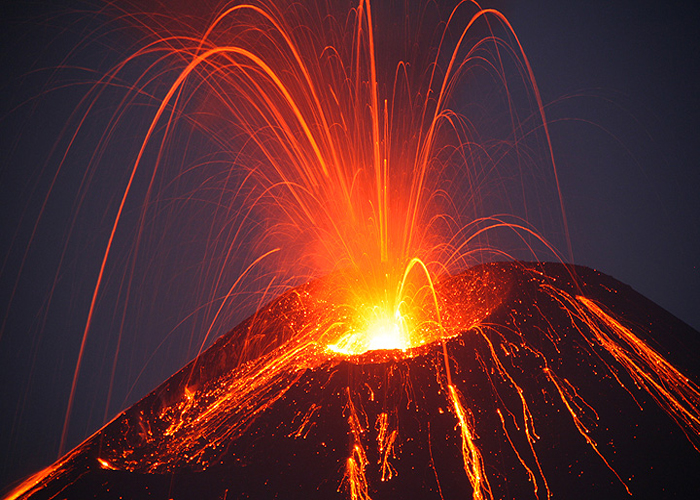 It is the first NATURAL cause of air pollution on the list.

Volcanoes are erupting since the existence of earth. It is,in fact one of the reason of existence of flora and fauna on earth. Nevertheless, it does cause air pollution.

When a volcano erupts end number of gases such as, carbon-dioxide, Sulphur-dioxide, carbon-monoxide, dust, smoke, etc. are released into the atmosphere all together at once. This may, effect or worsen the condition of global warming.

Human have already, done a lot of damage to the environment and the air that one breathes. Volcanic eruptions might deteriorate the air quality further. 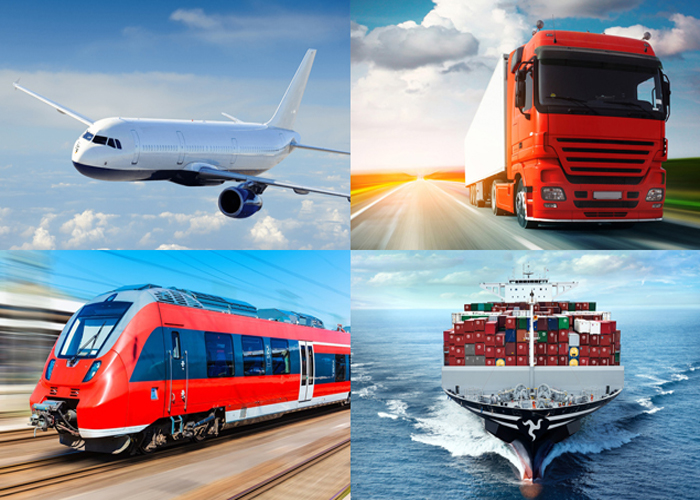 Transportation sector is yet another cause of depletion of breathable air in the atmosphere.

On an average the number of vehicles on road is exceeding the number of people travelling therefore, people should resort to smarter systems like carpooling or public transport to save the environment. Who doesn’t want some fresh oxygen?

In 2013,transportation contributed to more than half of the carbon monoxide and nitrogen oxides, and almost a quarter of the hydrocarbons emitted into our air.

This is one of the reason, Delhi government introduced systemslike, odd-even butthe result was ineffective, on air condition 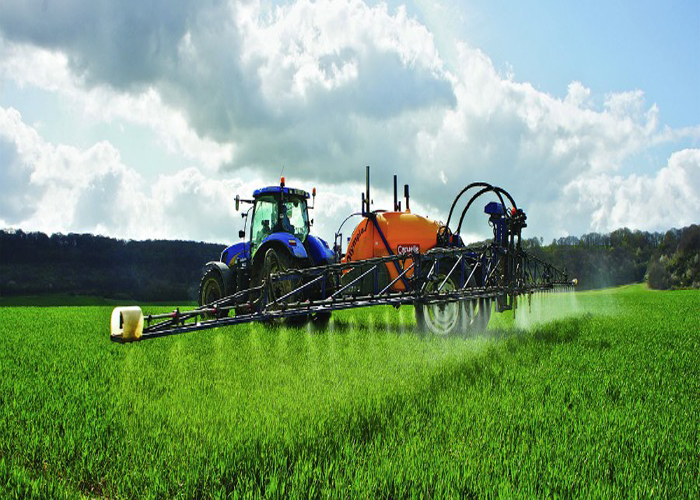 A tractor spraying chemicals on crop.

In agriculture sector farmers use chemical fertilizers to enhance the qualitative as well as quantitative features of crop production. Large amount of insecticides and pesticides are sprayed in the fields that contains harmful gases.

Also after harvesting the field is purposely burned to clean the land from leftover crops. 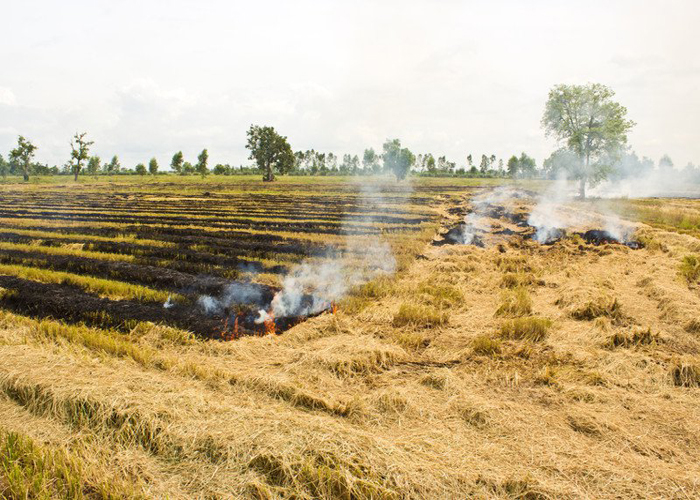 The left-over land and crop residues being burnt

This recently resulted in smog crisis in the city. 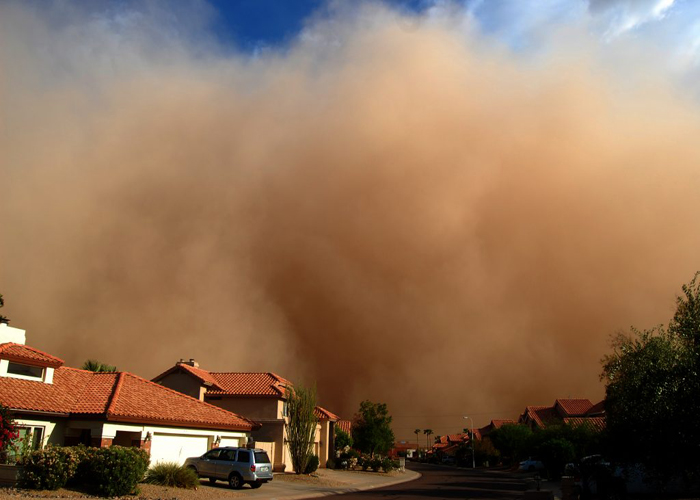 A dust-storm arriving as a huge monster causing air pollution

Dust storms and forest fires are the natural causes that pollute the air. 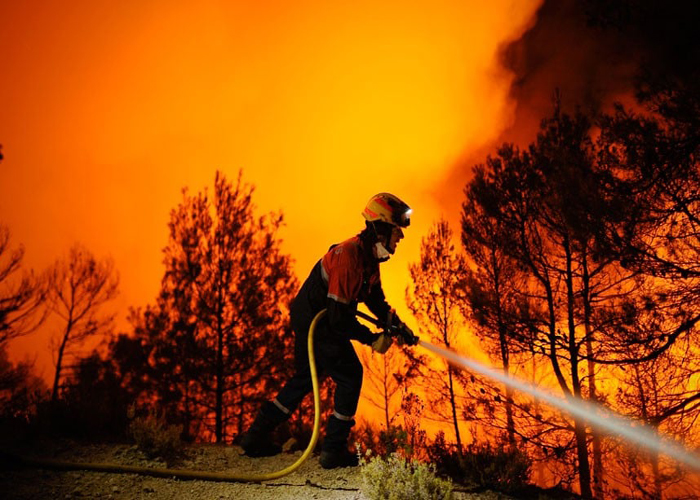 A fire-fighter struggling to extinguish a forest fire.

Forest fires are uncontrollable and sometimes can go on for days and even month. This results in emission of carbon dioxide and monoxide in air that contaminates the air.

Emissions from forest fires can travel large distances and produce harmful effects far away from the fire location.

Air pollution doesn’t limit itself to a certain area. It is a global monster. The air inside the house is as polluted as outside.

Inside air pollution is caused by day-to-day activities like inefficient cooking, smoking, etc. Exposure to polluted air inside the home directly effects the health of particularly, women and children.

To relieve oneself from the outside and inside pollution, werecommend, you to visit one of the top fiveair purifier in India.